Get Started Today!
ACCESS OUR CLASS SCHEDULE
And book your FREE lesson NOW

Secure your spot & get started today with our FREE EXCLUSIVE online offer!

By opting into the web form above you are providing consent for Traditional Okinawan Karate to send you periodic text messages. Standard rates may apply. You can reply HELP at anytime or learn more. You may opt-out anytime by replying STOP.
ACCESS OUR CLASS SCHEDULE
And book your FREE lesson NOW

Secure your spot & get started today with our FREE EXCLUSIVE online offer!

By opting into the web form above you are providing consent for Traditional Okinawan Karate to send you periodic text messages. Standard rates may apply. You can reply HELP at anytime or learn more. You may opt-out anytime by replying STOP.

I've been going to TOK for close to 6 months now and I can honestly say that it's the best martial arts studio I've ever attended. I practiced martial arts many years ago and dabbled in different styles but TOK is different than all the rest. The instructors and students are all very helpful and inspiring. There is a genuine desire to help you succeed and build your confidence at the Dojo. A friend of mine introduced me to TOK and she said, "it's like getting an instant family" and she was right. I was invited as part of a Friends and Family night and never left. A+++!

This is a very family oriented karate school. I have both my boys ages 7 and 12 enrolled. It has particularly helped my oldest son get motivated to not only get in shape , but he is excited about something! Anyone who is the mother of unenthusiastic teenagers knows how hard it is to get them motivated to do something that they are unfamiliar with. I am so happy we found the school!

An absolutely astounding set of instructors with the goal of inspiring students, giving them confidence, creating positive change in our community, and also being a friend. I've studied martial arts in other schools but have never felt this apart of a family before, and I've never been this excited to attend class!

This dojo is professional, efficient, encouraging and disciplined. They are all amazing with young kids and motivating for adults. Love them!!

Wonderful place to learn karate, grow as a person and gain a family.

Traditional Okinawan Karate has been wonderful with our 2 girls (7&8 years old) not only in their physical abilities like strength and balance but also in their mental ability, confidence and pride. The instructors are excellent with the girls and always manage to pay attention to each child individually even while teaching an entire class. They also know exactly what to do and say to build the confidence in the children and make them want to work harder.

Extremely professional staff and a wonderful environment for children. An excellent Karate school that teaches children not only self defense but also self respect and confidence. I Recommend this school very highly. Excellent for children of any age!

Great school! The kids love coming to every class. I love being able to take classes with my children, but the adult classes are fantastic. I Highly recommend NPKA!

The 7-year-old girl was beaming while she held her first place trophy for sparring in this past weekend’s karate tournament. But the words that came out of her mouth were about the kata competition, in which she cam 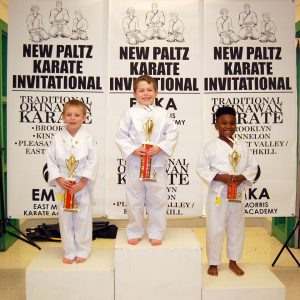 “Mommy, I didn’t even cry when I didn’t place,” she said.

The mom praised her effort and her emotional growth. In the last week before the tournament, the young karate student had practiced hard, but it hadn’t been enough against her competitors who nailed their forms. The girl said, “I can work harder for the next time.”

This past weekend, we saw students overcome: two teens placed in weapons sparring, when in class they were insistent that they not compete at all

because they were afraid of a new form of the sport.

An adult student won first place in sparring, the first physical competition in which they had ever bested others after a lifelong battle with asthma.

A five-year-old girl got up and performed in front of the judges, even though she was petrified. 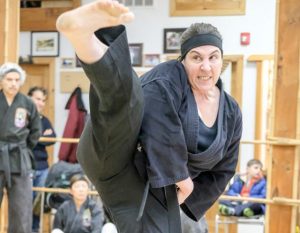 These students – adults and children alike – were able to push past their fears with the support of their martial arts teachers, instructors, fellow students and, of course, their parents.

We award participation trophies or medals each year, to all those who don’t get first, second or third. In some venues, this might be seen as placating. But, putting yourself out there to compete isn’t easy.

Many people stay at home and don’t test themselves. So, even if this tournament wasn’t their moment, they deserve recognition for trying. 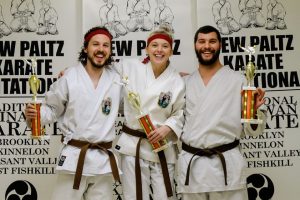 At competition time, teaching ourselves and our kids to win and lose with grace, is directly connected to praising effort and growth. Because, ultimately, success doesn’t come in life from winning all the time, it comes through hard work, persistence and pushing forward even when the obstacles put before you seem insurmountable.